After somewhat of a break for an international pandemic, the Emerald Coast Open was back in full swing this year. This year we had 145 tournament participants from around Florida, the US, and even Canada.

A bit of wind on both coasts kept the boats and teams from maximizing their time on the water, and really put a hurting on invasive lionfish. But have no fear. They will be hunted until next year when our brave ocean warrors will once again compete in the largest of competitions, the best of the best… The Emerald Coast Open

See you next year! 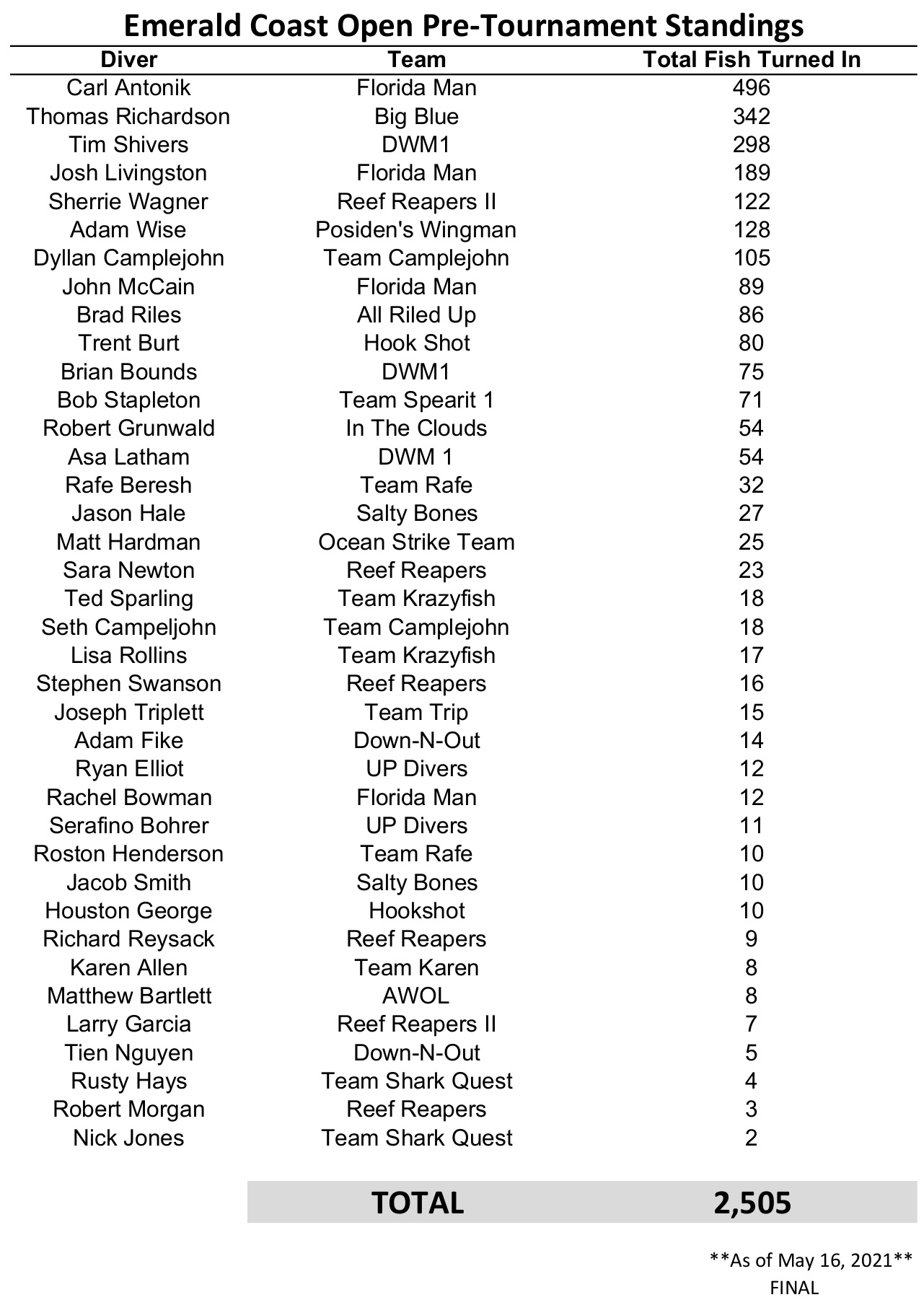 May 18, 2021 (Okaloosa County, Fla.) The Emerald Coast Open, the world’s largest lionfish tournament, returned to Destin, Florida May 14-16, 2021 removing an astounding 7,745 lionfish in the two-day period. This is in addition to the 2,505 lionfish removed during the pre-tournament competition, which kicked off on February 1, 2021 and ended with the main event headquartered at AJ’s Seafood and Oyster Bar along the famed Harbor Boardwalk. In total 10,250 lionfish were removed.

Locally-based scuba divers, as well as those from around the country and even as far as Canada, descended on Destin for the tournament, which is hosted by Destin-Fort Walton Beach and Florida Fish and Wildlife Conservation Commission (FWC). Over 50 volunteers from organizations such as Reef Environmental Education Foundation, Navarre Beach Marine Science Station and Tampa Bay Watch Discovery Center assembled to man the tournament and surrounding festival. Volunteer duties, which were overseen by FWC and Sea Grant, included tallying the catches of the 145 individual hunters that competed for over $48,000 in cash prizes and $25,000 in gear prizes.

The winning team, Florida Man, a Destin-based dive charter, DreadKnot defended their title by landing an astounding 1,371 in just 2 days and won the $10,000 top prize for Most Lionfish. The Largest Lionfish prize of $5,000 was awarded to team Bottom Time who brought in a lionfish that was 440 mm, or 17.32 inches. The Smallest Lionfish, which also commanded a $5,000 prize, was 41mm, or 1.61 inches was caught by team Into the Clouds and was the smallest lionfish caught in Emerald Coast Open history.

For information about Lionfish Removal and Awareness Day, visit FWCReefRangers.com

Captivating sugar-white sand beaches and emerald-green waters await in Destin-Fort Walton Beach. Located in Northwest Florida, the destination is not only an ideal place to unwind and experience total relaxation along a 20-mile stretch of beach, but to uncover the adventurous side within. The family-friendly locale offers an environment of discovery to play and explore, inviting kids to get on the water and give their adventurous side room to grow. Visitors enjoy pristine beaches, Gulf-to-Table seafood, abundant watersport activities, championship golf, lively nightlife, and numerous attractions, festivals and events designed to thrill all ages.

An ongoing thanks to our 2021 Sponsors!